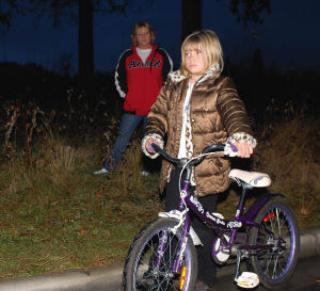 Cory Lyhne with her daughter Kirsten, who has improved academically and socially after taking part in two programs at Abbotsford’s Accomplished Learning Centre. Cory Lyhne knew there was something different about her daughter from an early age. Her little girl would cling to her all the time. Her husband would joke that the girl was “Velcroed” to Cory’s side. Kirsten started preschool, and the behaviour intensified. Cory eventually managed to leave Kirsten in preschool, having reassured her she would be back to pick her up. Kirsten would tell the other kids not to worry, that their moms would be coming back to take them home.

When she started school, mornings were spent in the principal’s office, with Kirsten crying for her mom. She could not be consoled. At home, Kirsten slept in her parents’ bed or on the floor of the room, and she would refuse to go anywhere without Cory. If she was invited to a birthday party, Cory had to go too. She would only play sports if Cory played. Kirsten was three years old when she was in the back of the car and screamed at her mother not to let the stick on the pedometer go into the red. Cory’s husband had once explained to Kirsten that the stick goes into the red if you drive very fast.Friends tried to reassure Cory.“Oh, she’ll grow out of it,” they said, but Cory knew it was more than that. Kirsten was also struggling academically. Teachers said she might have learning disabilities.Kirsten was assessed at the end of Grade 2, using a system similar to the old IQ test. She had severe problems and was very young for her age. Initially, Kirsten’s pediatrician thought she had mild obsessive compulsive disorder. But the more the pediatrician saw of Kirsten, the more she realized she had an anxiety disorder. Cory found herself searching for information on the Internet and bought some books on the issue.

“This is my child. This is why she is always so anxious,” thought Cory, relieved at last to find out what was wrong with her daughter.

She wasn’t a bad mom like she had thought. She could put a name to what was wrong with Kirsten.

Cory then heard about the Accomplished Learning Centre, owned by Ross and Lisa Pearson.

Clients are tested at the beginning of the program to see what deficiencies they may have. Kirsten completed the 12-week Processing and Cognitive Enhancement (PACE) program, which tested several areas such as auditory processing, planning, memory, visual processing, logic and reasoning. Specific exercises work on those areas, and the client is re-evaluated at the end of the program.

Kirsten also completed another 12-week auditory training program, Samonas. She listened to special CDs with special headphones to train her auditory system so she could listen and understand better.

The goal was to get her to think faster, stay focused and improve her attention.

“Most learning problems are related to certain cognitive processing deficits, primarily auditory,” said Lisa Pearson. “If that isn’t working very well, children can’t process what the teacher is saying. They’ll miss getting the lesson. It would be like if you had a teacher who had a very heavy accent and you couldn’t understand all the words; you’d miss chunks from the lesson.”

Since Kirsten completed the programs, Cory has seen her daughter continually improve – academically and socially.

“We see constant growth,” she said.

Kirsten was on an “individual education plan” (IEP) at school when she started the program.

“So, she was not doing what the rest of the class was doing. By training her listening and thinking skills she is now in a regular classroom doing what everybody else is doing,” Pearson said.

“Once a kid is on an IEP they’re considered to be on one forever. We can turn a kid around like that. She’s not the first we have done that with.”

The biggest change Cory sees in her daughter is her confidence. She rides her bike to school, plays with her friends and doesn’t cling to her mother’s side all the time.

“I really enjoyed it,” said Kirsten, who is in Grade 5. “It’s helped me with math and my writing abilities.”

Cory calls the change in her daughter a “miracle.”

“There have been gains everywhere,” Cory said. “It’s a pleasure. This is the way it’s supposed to be.”