Sound of Music has Big Benefits 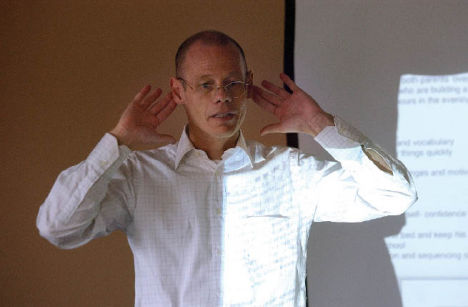 Apr 29 2006 – A piano tuner whose job was affected by a hearing loss was able to return to his beloved profession.A man in the early stages of Alzheimer’s disease was able to improve his communication skills and return to the social activities from which he had isolated himself.These are among the success stories of a music-therapy method known as Samonas (Spectrally Activated Music of Optimal Natural Structure).The German developer of the program – used widely in the U.S., Europe, Australia and Asia – made his first professional visit to Canada this month, choosing Abbotsford as his destination.
Ingo Steinbach, a scientist and musician, was invited to the area by Lisa and Ross Pearson, owners of Accomplished Learning Centre.The centre is one of only two sites in B.C. – the other is in Port Coquitlam – that uses Samonas in its work with children who have attention issues, reading problems, learning disabilities, and autism.Accomplished Learning began using the method last fall – after taking training in New York – and Lisa said she has been astounded by the progress of the 18 children who have used it.“At the beginning, it (Samonas) was tough to sell because we didn’t have anyone we had done it with, but with the first child, within a week or two, we were having amazing results,” she said.Lisa said these results include that temper tantrums and bed-wetting have stopped, hyperactivity levels have dropped, self-esteem has increased, and reading skills have improved.

She was so impressed with the results that she wanted others to know about Samonas. Steinbach was invited to Abbotsford to teach professionals and parents about the method.

Steinbach said he was more than happy to share his “life’s work” with others and was pleased with the response to the series of workshops he led in Abbotsford.

Steinbach describes Samonas as an “auditory intervention” method. It uses specially recorded music that is designed to stimulate the neural pathways into and within the brain.

The instruments, recording locations and musicians are chosen with great care. A series of about 50 CDs are available and are matched to clients according to their individual needs. The client uses high-quality headphones and listens to the music about 10 to 15 minutes, once or twice daily, for a few weeks or months.

The science behind the process is much more complicated than it sounds – so much so that Steinbach has devoted the last 25 years of his life to perfecting it. He started in university, fascinated by the work of Alfred Tomatis, a French ear, nose, and throat doctor who made medical and psychological discoveries that led to “listening therapy.”

“The auditory system is connected to almost every organ in the body . . . but the interesting thing is nobody ever thought how powerful that is (until Tomatis),” Steinbach said.

Improved technology enabled him to expand upon Tomatis’ work. To that end, Steinbach developed the Sonas recording system for the most precise, crisp musical reproduction possible.

Although relatively new to Canada, Samonas has proved successful in other parts of the world for the treatment of depression, hearing loss, Down’s syndrome, and brain injury.

Steinbach said it can also assist with areas such as balance and co-ordination; language development; energy and motivation; and improved task management.

“It is changing lives,” he said.

Lisa hopes that Steinbach, who completes his last workshop in Abbotsford today, can return to the community in the future.

“More people need to know about this,” she said.