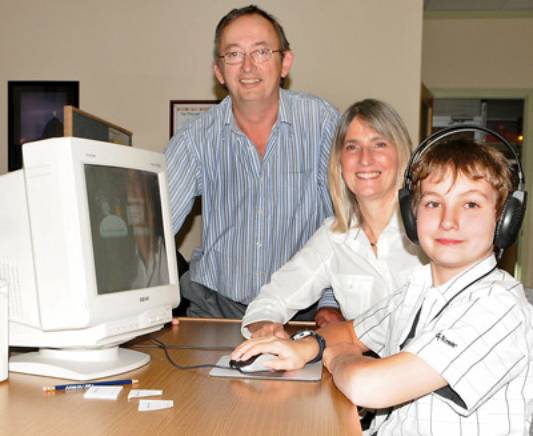 A computer program that makes lifelong changes to a child’s ability to read and understand language is proving so successful that the school that brought it to Langley is expanding.When Lisa and Ross Pearson opened the Accomplished Learning Centre in Langley Mall four years ago, they could not have anticipated the huge amount of interest, and the astonishing success of its programs, among them Fast ForWord. Fast ForWord is a computer program that helps children master the art of reading, and understanding what they read.

Touted as one of the most important and dramatic developments in education, Fast ForWord works by “re-wiring” the brain. With results coming in a matter of weeks, the program is being adopted by a growing number of school districts, including Surrey.

The program was developed by a neuroscientist after decades of research probing the reasons for learning and language problems, reading difficulties and dyslexia.

Fast ForWord consists of 11 programs, and students use them according to age and need.

Its ability to change the brain permanently has been proven by functional MRIs — scans which show the brain in motion.

Children’s progress after only a few sessions of Fast ForWord is nothing short of astounding.

“I had a little guy who was autistic,” Ross Pearson recalled in an interview. “In Grade 2 he didn’t know his alphabet at all, and after doing two of the Fast ForWord programs he now knows his alphabet and is reading at his age level. He achieved this using two programs in four months, and that’s amazing.”

He added, “After he started to grasp the alphabet, and identified sounds and which sounds goes with what letter, he just snowballed. He’s doing awesome in school.”

Lisa Pearson relates the progress of one of her students.

“She had no attention span. When she started (at the Accomplished Learning Centre) it was impossible for her to sit for 30 seconds.”

After four weeks with Fast ForWord, things began to change in the most dramatic fashion. She began to grasp concepts of time and money “and is doing math programs at home and blasting through them.”

Once, when she was sick, she insisted on going to school for a test. “She breezed through it in five minutes. The teacher was surprised at the speed in which she did it.”

This student was breezing through school work which once would have left her confounded and in tears. She is seven years old.

The Accomplished Learning Centre is Canada’s largest provider of the Fast ForWord program, and last year became the fastest growing learning centre in North America to offer the course.