These days, you might find Emily Rees-Howlett’s nose in a book. But it wasn’t always so. “I used to hate to read,” says the Grade 6 Abbotsford student. “Whenever my mom told me to read, I would go and hide. Now I want to read all the time and I can read much better than I did before.”

Rees-Howlett could be called a dyslexic. The term is familiar to many; often, people understand it to mean a person who reads letters or words backward. But the definition of the term is much simpler; the word essentially means a “difficulty in reading.”

“I love that definition,” says Lisa Pearson, owner of Abbotsford-based Accomplished Learning Centre, on Ventura Avenue. “There’s nothing more concise than that.” She explains that some students have a different way of processing information, leading to that difficulty in reading. Unfortunately, public schools are not necessarily equipped to deal with that.

“School is targeted to the masses, so the kids on either end are the ones who struggle,” Pearson says. “One low processing ability can make school an absolute nightmare for them.”

Rees-Howlett faced such a nightmare before starting her sessions with Accomplished Learning Centre.

“Before I started at the centre, I’d be in class and the teacher would ask the class something basic, like read a story and write two lines about it. I would just sit there. I’d be like, ‘What am I supposed to read? How am I supposed to read it?’ I just didn’t get it,” says Rees-Howlett. “Now I can do it. When my teacher tells me to do an assignment, I get it done… I don’t just sit there.”

“Auditory processing is the big one,” says Pearson. “It’s how you process what you hear. Your ear can be fine, but you might still not get the message.”

Her centre, which has a second location in Langley, is designed to help students overcome such processing barriers by learning to process information in new ways, with certified educational programs like Processing and Cognitive Enhancement (PACE) and Master the Code.

Pearson, and her husband, Ross, are both certified trainers.

“Reading is a complex cognitive process,” explains Pearson. “Children with dyslexia have a problem translating sounds, and we train them to be able to hear those sounds. When they can hear those sounds, they can learn to read.”

Using traditional phonics isn’t very effective for older children with processing difficulties, she adds. “By Grade 3, phonics are more the exception than the rule,” Pearson says. “You can’t go back to that. Linguistic methods are 100 percent successful, but they have to be done one-on-one. It is all based on sound.”

It can be a painstaking process, Pearson adds. “We suggest six one-hour sessions a week, three with us; three with the parents. It takes a lot of time, and schools can’t do that.”

It’s also a financial investment, anywhere between $3,000-$10,000. “But there are resources out there to help,” says Pearson. “Money should not be the reason someone doesn’t do this. People don’t come to us until they’ve tried everything the school can do.”

“This was a last resort for Emily,” says her mother, Hailey Rees-Howlett. “We didn’t want her to continue to struggle and be labeled. She started to have a lot of problems with teachers and it became a crisis situation. So we started [with Accomplished Learning Centre] last August just before she started Grade 6.”

Pearson adds: “If they don’t deal with it, it really starts to affect their self-esteem, which can lead to behaviour problems.”

As she poses for a photo, Emily’s confident, sweet smile speaks volumes about how far she’s come. There’s no difficulty in processing that.

Accomplished Learning Centre is located in Langley, BC. For more information call (604) 539-1386 and check out assessments and all our programs.

We are cautiously beginning to accept students for assessments and one-on-one sessions.
Read more. 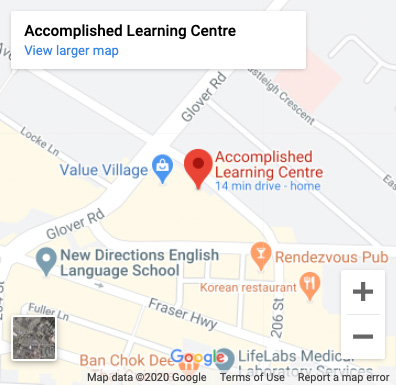